Melting your soul, molding your life in the Alley

I'm going to give a personal year-by-year account of my experiences at Dally in the Alley. If you live in the Detroit area and don't know what Dally in the Alley is, then you should learn about it and just go. It's a great counterpoint to the commercial path that most festivals have taken. It's free, community focused and non-profit, bringing together people of all ages, ethnicities, lifestyles and backgrounds. I met my bandmate Leah at the Dally 2008, and I've always loved it there. My band Eleanora is playing there at 3:30 on the Forest Stage. You should get there early and stay late. Good luck parking if you're taking a car. Here's my history with this beautiful festival. All photos are taken by me unless stated otherwise.


2005: My first Dally. I didn't even know it was happening or what it was until that same afternoon. I moved into my dorm at CCS (10th floor, formerly a luxury hotel) the week before. I am on my own for the first time in my life. My white girl dreads are starting to lock in. I walk the streets feeling like I have been transported to a different time and place. It is low-lit. It is packed. It is loud. It is full of hippies with smiles on. It is my 18-year-old libby mind's heaven. I buy a patchwork dread cap for 20 bucks.

2006: The first year I go with Scottie. I don't remember much from it other than that, honestly.

2007: I wake up on the morning of the Dally, confused as to all the noise going on outside of my new apartment at Forest and Second. I saw the banners. I take a picture. I realize that this was exactly where the Dally in the Alley takes place. Scottie, Rachel and I take turns sitting in the bay window, watching the happenings. We go out and explore. We meet Rodriguez. We meet John Sinclair. We talk to people in Amsterdam Coffeehouse in the basement of our building. We feel the community. 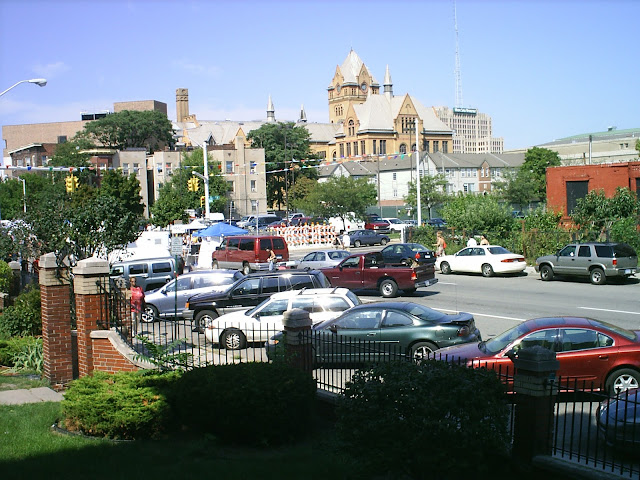 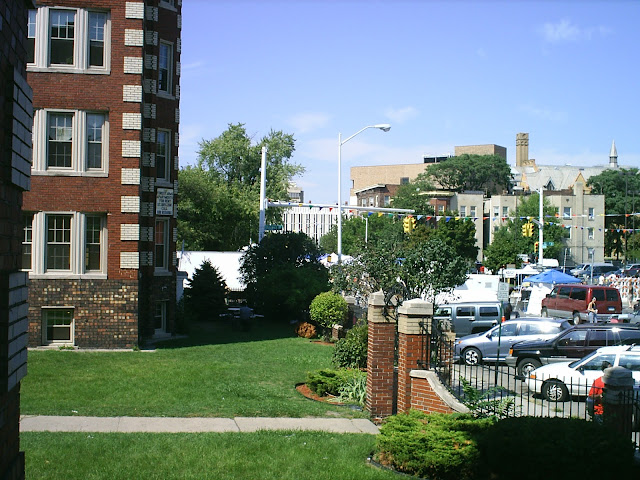 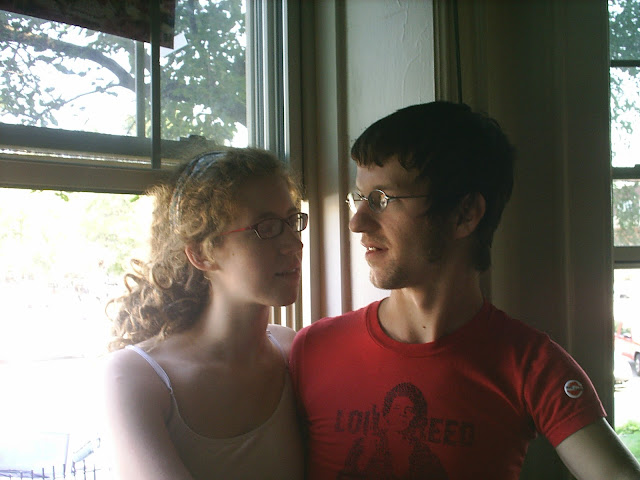 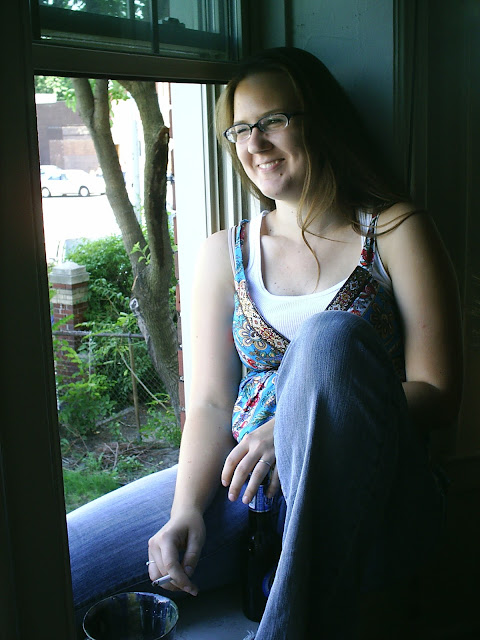 2008: Less than a week before this year's Dally, Scottie gets a call from Blair. "Hey, I need a drummer for the Dally in the Alley. Do you think you can learn a few of my songs and play them with me and a couple other people from my band?" They practice the day before the festival, where Scottie meets two lovely women named Markita and Leah who play trumpet and clarinet, and sing.

The day of Dally, I help Scottie unload the drums from my purple Plymouth Voyager. I stand in front of Forest Arms and recall the year before, when I was looking out of that window that's now boarded up. The building is a ruin after the fire in February that claimed the top two floors and one man's life. A beautiful young woman walks up to me. Scottie introduces her as Leah, the clarinetist who plays in Blair's band. We have a little chat and they set up on the Forest Stage, right in front of the Forest Arms. My sister comes up and we watch the band play together. The rest of the day is fun, and I get to talk to Leah and Markita more. 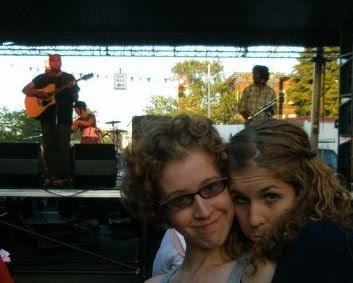 
2009: Scottie is in Rogue Satellites. We just moved to Ferndale. Rogue Satellites are playing the Alley Stage. Scottie's sister, brother-in-law, and nephew and niece boogie to the synth and drums. He brings Wendell up on the stage with him to try out the drums. Then there's a party at the Illy Mack apartment, with a lot of loud music in hot rooms, and I pass out in Steve's bed. I wake up the next morning to the sounds of someone throwing up in the doorway. "Yes," I think, "It was a successful Dally." 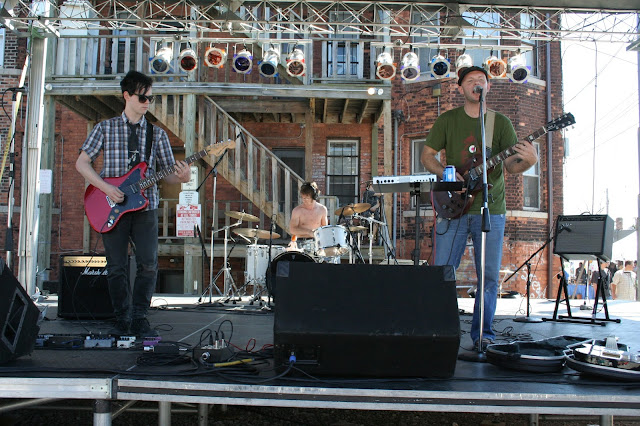 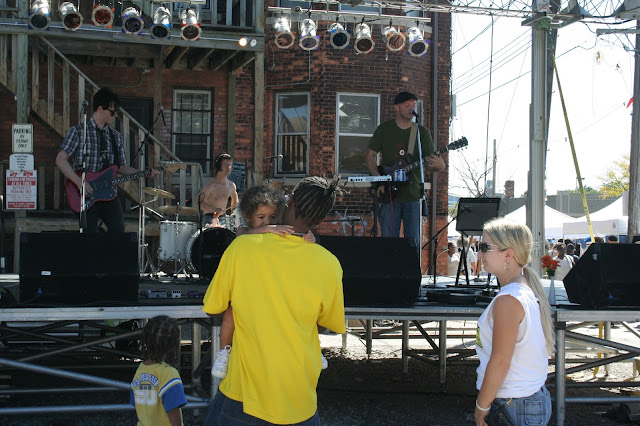 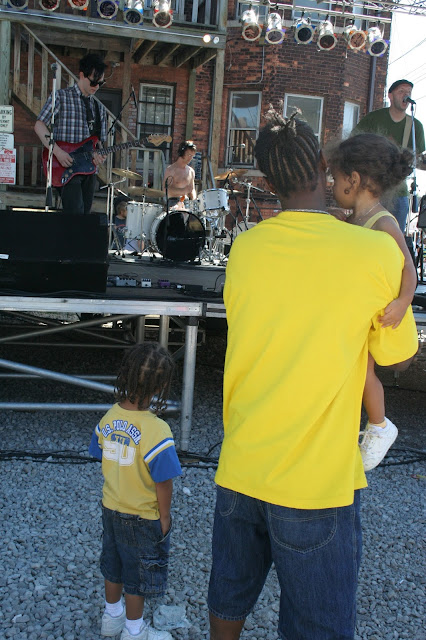 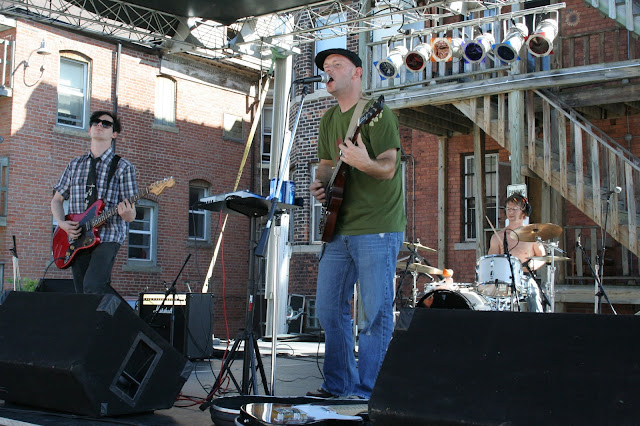 2010: Scottie plays a set with Tone and Niche during the day at the Forest Stage again. It's been a while since they've played together but he remembers the songs. Marco Polio and the New Vaccines play the Garden Stage late at night. Everyone wants to party, which means everyone wants to mosh really hard, and Steve Puwalski has to stop the music to tell everyone to calm down, have fun but have respect for each other and be in this one human family. 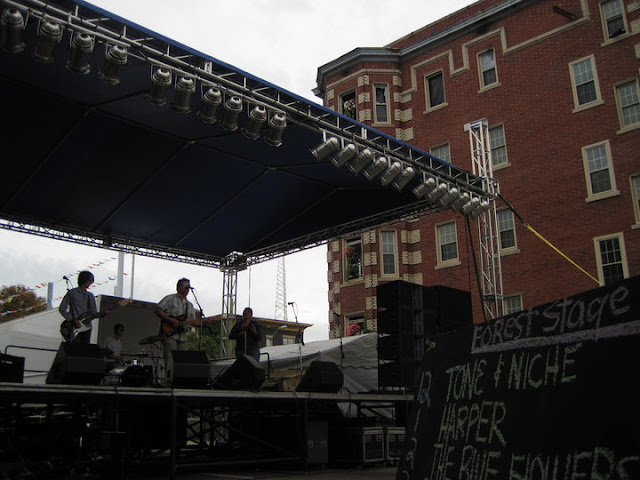 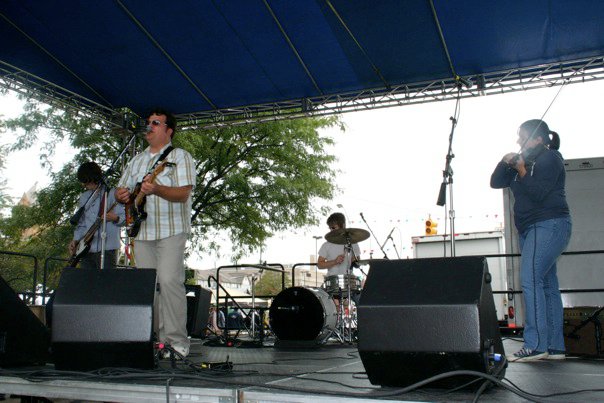 2011: Blair left the world in July of this year. Audra Kubat rustles up a tribute where all the "Boyfriends" (after Blair and the Boyfriends) play his music. We are irritable. We are in mourning. We are good musicians who know his songs. We take the garden stage, and, though guaranteed an hour of play time, are given about 20 mins. It's heartbreaking because of how much we prepared, practicing at the Trumbullplex to get the show together. Yet I know the stages always run late. Leah and Markita are up there, Leah (my bandmate since 09) expecting her son, and also many of our friends, like Mike Anton, who survived a shot in the face on his birthday earlier in the summer. It's an emotional concert but the love just flows out of us. It's also my sister's going-away party, as she's lived on Hancock and is about to move to the UK to get her Master's degree. Her backyard is inside the actual alley. 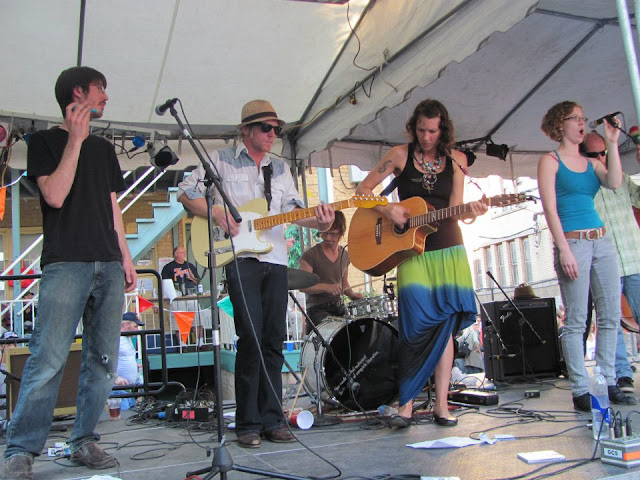 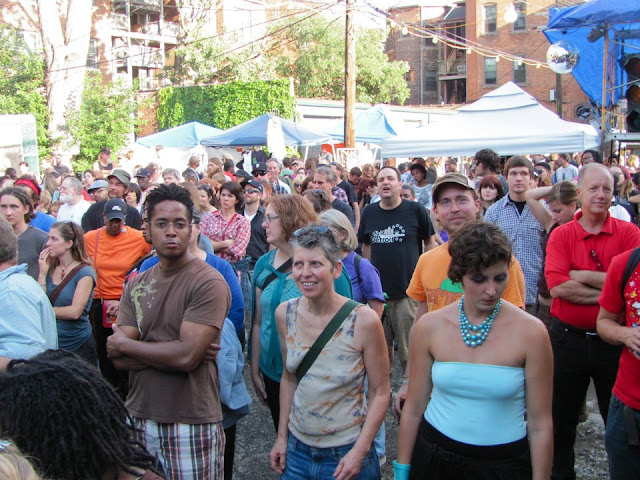 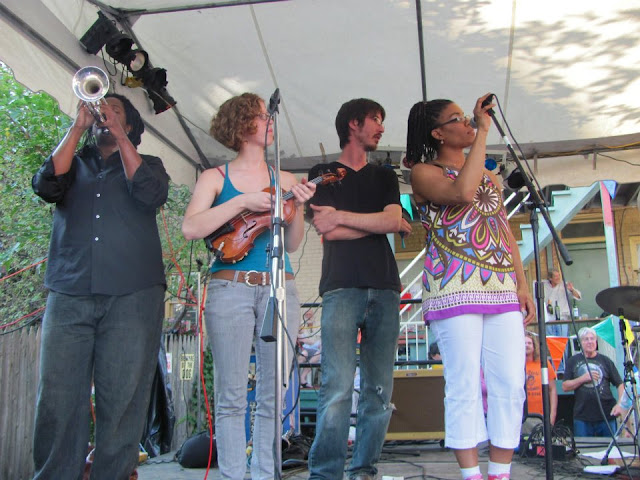 2012: J. Walker and the Crossguards play the Alley Stage to a big happy crowd. It's a dance party. It's a joyous celebration--as it has been since I have known the festival, as it was since the 80s, and as it will always be. The sun sets to their Motown-garage fusion and I feel at home. Eleanora was slotted to play at a point but we couldn't because of work conflicts. I think, "Next year. We gotta do it next year." 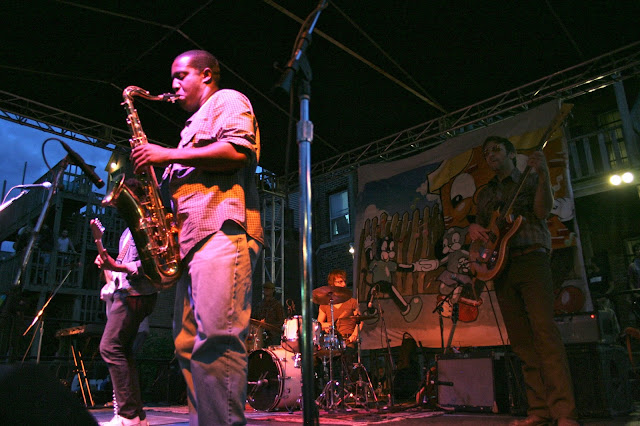 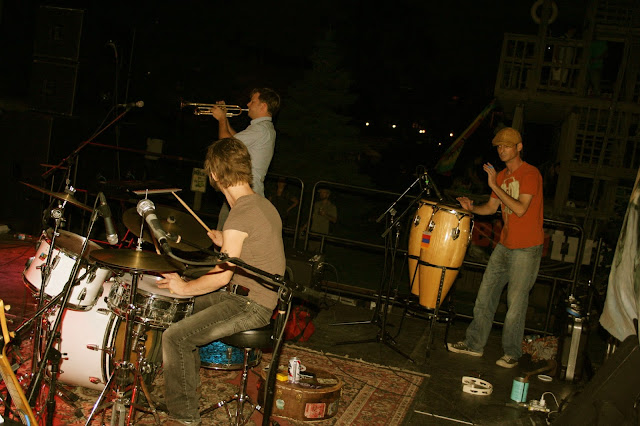 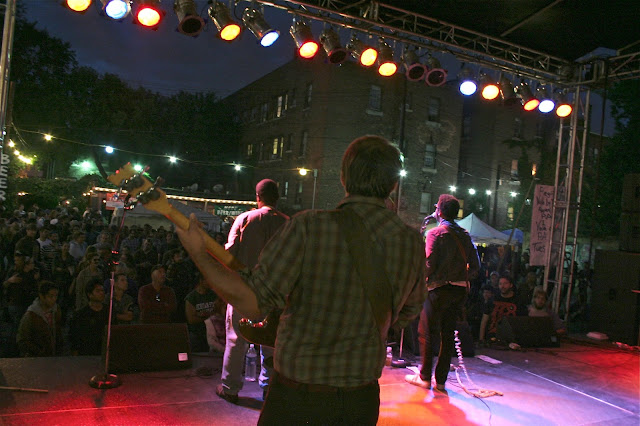 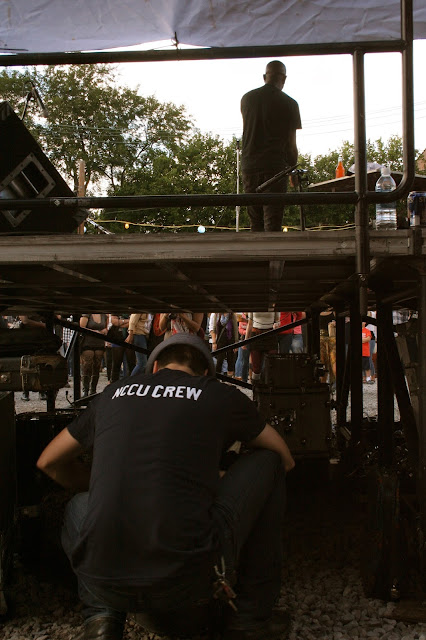 So now it's 2013 and my band Eleanora is going to play. I feel like a baby because so many of my friends have been going since the 90s or earlier. Do you have a favorite Dally memory?
Posted by Jesus Christine at 12:54 PM