Oh, yes, we will be blown out. 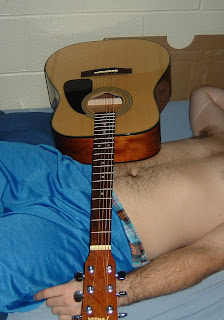 I don’t pretend that anyone cares about other people’s carefully-thought-out picks for Hamtramck Blowout (in the same way that I haven’t a clue nor a care about these Oscar things everyone’s pretending are important). But I guess if I’m running a blog and make a post every so often, and if that blog should appear on a roster of Detroit music resources, I should probably write something about music once in a while.

I want to see a bunch of new bands this year. There are a lot of classics that I’ve just never seen, either, but I’m pretty good at faking that I have. And there are several bands that I have seen, (some multiple times!) and remember nothing about the whole night. I’m going to play it safe with my opinions, though. The new/unheard of bands are a stab in the dark for me so I can’t advise who to see, but I’m glad they are getting this exposure (considering mine is part of this group, too!).

So if I could transport myself with extreme ease to any bar I wanted, and if I didn’t work at a restaurant at night, this is what I would do on Blowout week. This list is for anyone who is obsessed with everything I do. Read on, Mom.

This is easy because everything is in one place and spaced out in a timely fashion. As much as I’ve tried to catch Secret Twins all over the place, I have, alas, been unable to see them. I’ve heard their tracks online and I dig it. I’m a little puzzled about The EEKS playing this night; I saw them this summer at one of their first gigs and it wasn’t anything special to me at the time. A lot of energy from the singer; power-punk with a poppy edge. I suppose they’ve grown in waves since then, though they weren’t bad as fledglings in August. One band I really want to catch is FAWN; they had a record release thingy that doubled as breakfast one time this summer and I thought, “Oh, how cute” and then when I listened to the music I thought, “Oh, how great”. It seems the fairer sex is dominating the night at the Magic Stick. The majority of the musician community is unconsciously wincing a little inside. Sorry, I had to say it.

It’s pretty hard. But I do know that at midnight I will be obligated and ready to watch/participate with Marco Polio and the New Vaccines. Just recently they opened up for Deerhoof and I don’t even think I have to mention my obvious bias. I will probably try to start the night off at GofC Lounge (that’s called street talk; I’m cool enough that I can use it so I don’t have to put in a dozen more letters), with Tone and Niche. They are pretty nice cats. I’ve seen them many times before, but they always deliver and would be a great fresh way to get going. Nichole will kill on fiddle; I can only aspire to even attain her tone (ha) someday. Because they’re going on so early, I’ll be able to catch Hi-Speed Dubbing in the Hall just yards away. I like those guys. Definitely a change of pace and it’ll give me a chance to pay more attention to Justin’s guitar playing. Then I’ll pop back over to the Lounge again to catch some of Scarlet Oaks; they will have some lineup changes this time around, but I hope to hear some grittiness on drums. Noelle was great for the dirty and nonchalant way she kept the beat, and I want to see what a change of personnel will do for them.

In a perfect world I would make it to see Robin Goodfellow at Mars Bar. This project has been remarkably well put together in a small amount of time. I blame it on their crazy light show, pyramid hats, and Nathan Burgundy’s firm commitment to the bowtie. And I really want to check out Indian Guides, as my multi-faceted friend Jason Worden is a member and I have yet to see them. But it may be impossible to get to Skipper’s and all over the rest of town before going back to Mars Bar to see Polio at midnight. …Because I also want to finally hear Zoos of Berlin at the New Dodge. I can’t even remember if I have actually seen them live, which is a sad thing, because I often pretend that I’ve heard everyone in this town. But I have heard their recordings and they are quite fabulous. I’m sure anyone reading this probably knows that already though, except my mom (hi, Mom!). If I weren’t watching my maniac boyfriend and his maniac friends tear it up at midnight, I would be simultaneously at Small’s for Illy Mack and the New Dodge for Child Bite.

This is the night I will grace the stage. My five-piece band, Eleanora, will be at Baker’s Streetcar at 9:20 sharp for the Loco Gnosis showcase, which is exciting. We plan on literally murdering everyone there with our music. But in a way that you feel like you could never experience something so wonderful ever again, so you welcome death. Though the reality may be that I will stay for the rest of the Loco night, after I play I will try to catch Forget at Whiskey in the Jar. Another one of Worden’s projects, it features a different lineup each and every time, and is completely improvised. How’s that for a set list? After Forget makes me forget everything I know about performing and creating, I’d like to see some good weird rock and roll over at Small’s where Bars of Gold is playing. It’ll snap me back into the present time and place, plus I hear that drummer is kind of a badass. I’d fancy a trip back to Skipper’s to see Tare, which I loved about 2-3 years ago when I first saw the two-piece at the Trumbullplex. Drums and guitar, hard and fast, short and dirty. It’s starting to sound like Friday will be a night for heavy drinking. It would be nice to catch the beginning of The Octopus, and then see some of The Kickstand Band at GofC Hall, where my middle school friend Allison is showing her bass chops. I’m used to her on trombone and I’ve never seen this band. And then it’ll be back to square one at Baker’s with Duende tearing it up: the craziest vocals, the longest bass drum, and the slickest guitarist in Detroit all under one roof.

Saturday I will be both hung over and working at night, so the following is hypothetical. But Pewter Cub is friggin’ amazing and I’ve already written about them, so obviously they are now famous and everyone will be at their set at Baker’s. It would be fun to check out “DJ Tim Vulgar” at the Painted Lady, and be a part of his Kresge performing arts grant at the Human Eye Showcase. I think I’d mostly be hanging out at the Loco Gnosis stage again, though, with kinda-newbies Crappy Future; the best family band in Detroit, Woodman; and last year’s apple of Detroit bloggers and partiers eye, Macrame Tiger. I am not going to be there because two of my coworkers are in that band. Other favorites of the night definitely would include The Mantons (another great drummer), Legendary Creatures (who can cover Elliot Smith and not sound like a fuckwad? They can.), FUR (again, I’ve written about them, they will make you feel all warm, tingly and stabby inside), and Electric Fire Babies (mash-up of Carjack and Hi Speed Dubbing and other craziness, bring it on!).

I put waaaay less energy toward Saturday than the rest of the days. Sorry. It’s the law of sleepiness combined with a lack of concern due to the fact I won’t be there.

I want to ask, what are the new acts you would recommend I see, or groups outside of my normal zone that are worth making my way to? Let me know!

I find myself caring about this stupid shit. And I'm not sorry, it is stupid shit. Perfectly constructed characterizations based upon statistical findings about the public coma that has settled on the vast majority of the first world population.
I know it's easy to relate to these people we see on TV. Of course it is; that's the way they are designed. The more relatable, the more interesting (in the most formulaic sense of interesting) the setup is, the more people that watch it, the more money that is made from ad revenues. Duh. It's as though everything is a ploy and we're not just victims of it, we become the perpetrators of it through out complete belief in it and surrender to it. Ironically, reality TV is set up to be just the opposite, with its grotesque portrayal of everyday life taken as somehow candid and believable. And I enjoy it. Of course I do. I have a hard time being strong enough to resist it, considering my receptiveness, but Jesus Christ, I really fucking should. There's absolutely no fucking reason that I should be feeling sorry for the nice girl in the Office or the shrink in Bones or even the feminist in Community. Because as nuanced and complex as they seem to be, they are really cartoons. Without a doubt. The viewer must be either entirely sympathetic to them or laughing cynically at them. It's the winning equation. And it's the human condition to have this strange sense of community--we're the weirdest herd animal that has ever existed. We simultaneously pit ourselves against one another and become obsessed with one another. We need to be around friends and crowds and need validation of sorts in various ways, and we need the serenity of isolation that being by ourselves provides us.
It's like media does its job: to be a mediating force between individuals and the society to which they belong. And that is exactly the point at which we need to fight it. It does the important work for us and creates for us meaningless tasks to replace those important things with--to satisfy our chemical impulses and philosophical questions that have lost their original ends, as we surrender our decision-making to an artificial intelligence that we ourselves have created.
Which is the exact definition of a drug. It's fucking worse than any drug a person will take in her lifetime. Because she's forced to be on it 24-7 and it's the very fringe not to be, and no one is telling her there's anything wrong with it. It's perfectly normal and healthy to be not just addicted, but absorbed in it, according to our education.
I need another glass of whisky.
Posted by Jesus Christine at 9:41 PM No comments: