The Things I ACTUALLY Did at Blowout. 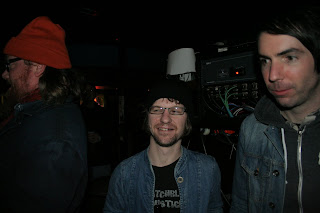 As someone (me) once said (about a week ago), "I have a feeling my post-blowout post is going to end up being mostly stories about me wanting to do a bunch of shit but getting drunk instead. ...Actually that sounds like my biography." Of course it's dark humor; my liver is in fine shape, even considering the damage I wreaked on it during so-called "festival kickoff weekend". But the fact that the picture above and five others almost identical to it are the only ones I took at the pre-party definitely set the bar for how the other nights would go. Granted, I became more productive in documenting, but I definitely did not do anything close to my ambitious promo/wishlist post. This is what actually happened, but you must imagine it all amplified in beer, sweat and flowers.
Wednesday:
Made it to the Majestic complex in great time; we got our wristbands and headed for the bar, where we promptly managed to stay talking to passing friends for over an hour, by which time we thought maybe we should combat any claustrophobic and budlightophobic tendencies to head upstairs for Lettercamp. Of course it was even worse than downstairs. The moment we got in there were roughly 1846 people we knew ready to give us hugs and tell us how excited/drunk/broke they were and we returned the feeling. I never listened to a note of Lettercamp, because I was outside talking to people from Sharky and the Habit and Blue Black Hours. For some reason I spent a lot of time on the deck. Then basically I saw a couple of minutes of the Julie Hecker tribute and tried to pay attention to Moon Pool and Dead Band. I liked some of what was going on with that but honestly wasn't really in their mode. Secret Twins took the stage and became the best-remembered band of the night, despite the fact that I never really looked at them and it was at the end of the night when I was drunkest and I was standing behind a pillar at the back of the room. That really says something. Dina's flying v guitar sound was awesome; they could have gone with the cutesy acoustic guitar-drums duo but they're smarter than that and got the attention they deserved. Definitely something I'll be seeing more of.
Thursday:
After loading up the gear, I headed down to Mars Bar with Steven and Scottie, where I ended up the entire night, not counting a short trip to Jet's Pizza and a brisk parade down Jos Campau at the end of the night. But that's later. We walked in while Betty Cooper was playing. I'm not going to pretend I know their history or anything but I recognize the one singer from somewhere that just can't be placed. 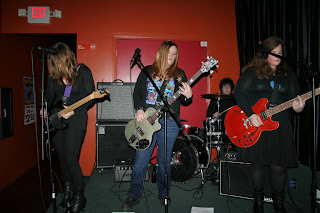 Very pop-rocky, guitar driven and catchy tunes. I enjoyed it. It was confusing at first when the go-go dancers hit the tabletops; I thought, Did this band hire dancers for their set? Weird. But the two girls were hired by the venue, and as strange as the setting was, I talked to them briefly and they're nice. 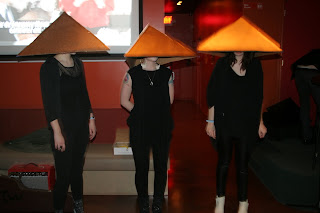 The next band to hit was Robin Goodfellow. There's one on the list I got. They brought their pyramid-headed wood nymphs and strange electric folklore into the Jersey Shore bar while Superman IV played on a huge screen behind them. It was pretty incredible. 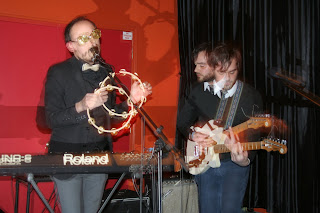 I love ^that picture^. I think it's something I'll never replicate. 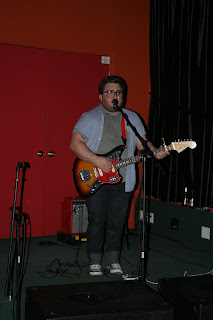 Banxx was after Robin Goodfellow, but it ended up being Allan James by himself. I think I heard in passing that there was supposed to be someone else in the band but something happened to bar that. Either way, it ended up being awesome in ways (he covered Vic Chesnutt and offered hilarious banter), but awkward in others, as it became a strange lull between a couple of concept bands. Just a set order strangeness. 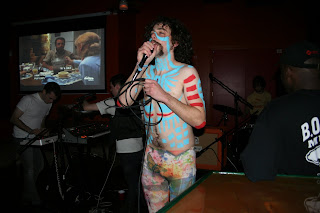 Then came Marco Polio and the New Vaccines. I painted Steven, a somewhat regular thing for me now. I had better start getting a stylist's salary. A couple of the 20 bouncers at the Mars Bar were alarmed at the frantics of Polio, and at one point two friends got yelled at for standing where the dancers had been doing their thing. Two new songs, very enjoyable. Black cardboard box monoliths were in the audience, and the only flop of the night was when the audience insisted on throwing said boxes around. Hard-edged boxes are far more dangerous than balloons. 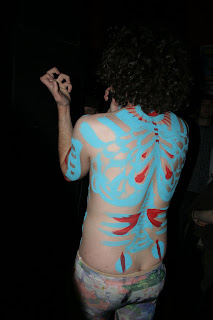 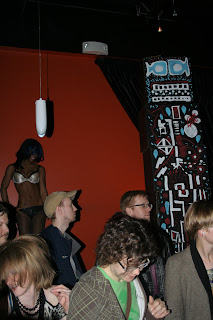 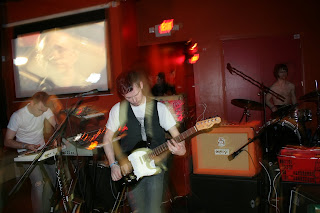 After the regular set was done, they continued their last song (a classic, "Dance With Nobility") into the streets of Hamtramck, with a resident walking a dog beside us and so many of us in tow. Steven was able to make it onto the Night Move, but the failure to coordinate the whole band to get on thwarted the idea of riding to another venue. Still, the parade down Jos Campau was surreal. 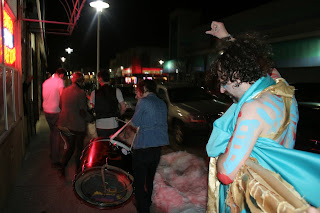 Friday:
My band played first at Baker's. With the Loco Gnosis showcase, we knew there would be a built in crowd of some sort. At first we were worried. 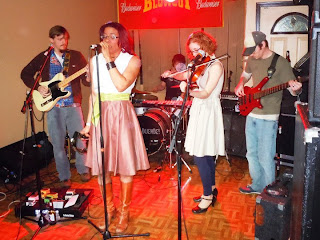 But our fears were assuaged by the time we went up to play. The place was pretty full, and a friend recorded the whole thing, and I just have to say that sound guy was the best we've ever had. Not only could you hear the violin perfectly, the friggin' clarinet was clear as a bell. We had a lot of fun and introduced another new song. (Photo by J Michelle Dark) 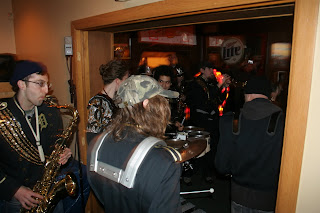 As soon as we were torn down, the guerrilla Detroit Marching Band entered with all manner of drum and trumpet. It was cool to see them, though I guess some people had heard them play like ten times over the weekend and got a little sick of it. Once was just fine enough for me. 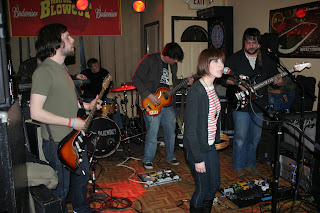 I got to see a little of Electric Lion Sound Wave, who make great sounds that coddle and surprise your ears. Since I had stayed at a single venue on Thursday, though, I was determined to go out and experience other bands/bars. First we tried Smalls, where Bars of Gold was playing. I believe Scottie is cheating on me with Brandon Moss, which is okay with me, because he's fantastic. But neither of us got a chance to see his other love, because the place was so jam-packed you could not get in the room. Seriously. So we packed that train up and went to Skipper's with some other friends to see Tare. 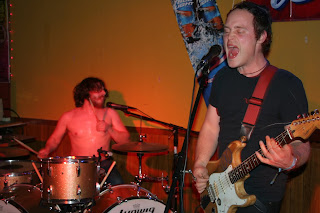 You should see Tare. Really. They are high-energy, spasmodic, and damn good. It's a two piece featuring members of I, Crime, but this band is nothing like the americana-rock of the latter. Switching beats, moods and tempos drastically in the middle of songs (all perfectly timed, too), they are entertaining as hell to watch. And I know, I've observed hell. 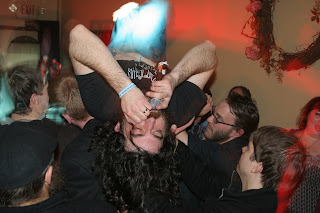 It was time to head back to Baker's, and luckily we didn't miss any band completely. I came in while Jehovah's Witness Protection Program was on their last song, the one about freedom. Anthony was able to crowd surf in the strange room, which was awesome. I was a little tuckered out, but you have to keep on keepin' on, so I got another beer and got excited for Duende! 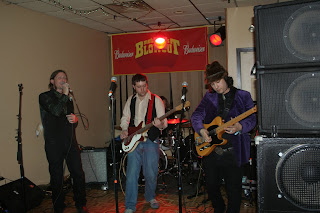 Duende! killed. Their unique sound was well-received and, though usually the rowdiest, they were a perfect centering force for the wasted masses. Owed in equal parts to the straight and hard drum sound Laura gave, the poetry of "Jellyroll" Joel's guitar, the cut of Scott's bass, and the wildly hypnotizing vocals of Jeff, Duende rounded out my Friday perfectly, able to pull off "Tombstone Blues" in their own psych-country-punk way.
After that awesome night, I went home and slept soundly, my ears still ringing.
Saturday:
I was in Ferndale giving people sushi and making a little dough. Scottie got home around 5am after an afterparty to end all afterparties. No one got killed.
Posted by Jesus Christine at 12:44 AM No comments: