The Conundrum of Spring 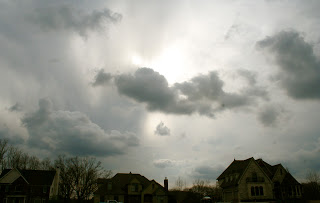 When Spring comes, we become voyeurs again. We peek into flower beds and perk up for the love songs of trees and swamps. The sounds of birds have become particularly dense, almost overriding the noisy swish of cars driving far too fast down the block. Thank God. Winter mild though it might sometimes be, requires self-examination to a point of unnecessary self-loathing. The inwardness of it isn't productive. It's a cancer. It eats from the inside out and, because we cannot appreciate the silence of Winter, we distract ourselves with paralysis that we pretend to be movement (shadows on the cave walls during winter are very nice).

Sometimes, the loathsome conditions of February are met so suddenly with the bustle and rage of Spring that it shocks the system. We panic. This can be the case every year, even when it is expected. One cannot truly prepare for fulfilled promises after months of brokenness and mystery. The change even, at times, triggers a further coil inward, to block the burst of collaboration, of physicality, of joy and sex and work. It's too much to see the truth and light. Too much to have the ability to venture and conquer. This is the conundrum of Spring. And it applies liberally to those who have forgotten how to adapt to it. Namely, repressed and confused adults. 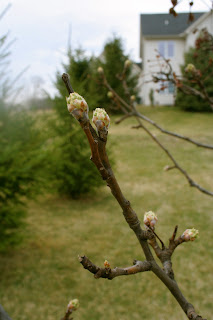 So, then, our missions must be to accept the words of Spring as we accept the words of Fall. Though it's hard and allergic to brush off the dust, exciting colors lie beneath. Though a run may render a painful fall, it also renders a good story. Movement gets those little bulbs of expenditure sprouting. We must thrust ourselves into every dawn now, get planting, and make eye contact. Look into the eyes of the world and its moving parts. It's terrifying to fully see a thing. But it's the first step to authentic experience, and it's necessary among present conflicts and perils. Just as important as reserve, store, stabilize are to the Fall, so leap, plant, share are to the Spring. The ideas we talk about at harvest time--the slowing and localizing of life--are not dismissed but rather invigorated by the persistent growth of an early, swift "warming up".


The panic-inducing business of March is just and beautifully a phase. Enjoy it.
Posted by Jesus Christine at 5:08 PM No comments:

**Disclaimer: I am way behind the musical times when it comes to the business and news of it all.**

It is a rare and mystical acoustic trio that can command the attention of The Loving Touch crowd on a Friday night, and it's like sighting Sasquatch for a cellist in that bouncy sound-hole to ring clear and strong. Matt Jones, Colette Alexander, and Misty Lyn are beauteous unicorns, then (and the sound guy, too!).

I saw Matt Jones and the Reconstruction last night. First of all, I've thought before about the use of a cello as the bass instrument before, so it was exciting to see that idea in action, and it really worked with the register of the vocals and guitar. The cello's sound was pure, thick and rich, and I could go on for days regarding Miss Alexander's craft with her instrument, not to mention her fluid and intense movements. I kept my eye on her through the set, just watching her technique, trying to pick up a few things for myself. While that fact in itself could have been enough to really overcome the other elements of the band, Jones's own particularities with melody-writing and subverted folk kept the focus moving, so that the songwriting shone just as well. I'm always impressed with a good melody, but it wasn't the usual brand of washy folk, which impressed me further!

Had I not been paying such close attention to the fantastic cello work, I would have focused much more closely on Misty Lyn, who provided near-constant backing vocals. I don't know if Misty Lyn normally plays with them, but her harmonies and energy really worked. She's one of those songwriters that everyone I love dearly has mentioned to me at some point but I'd never had the privilege to see in her own band. Obviously I still haven't, but seeing her with Matt Jones gave me an idea of her prowess.

Please check out their Facebook after you've downloaded their record on bandcamp. It's been a while since I've been around the Ypsi/Ann Arbor scene, but I used to hang out there a lot, especially around Tone and Niche, and I know there's a lot of music out that way that's really right up my alley. Last night was a very nice reminder of that.

Posted by Jesus Christine at 3:17 PM No comments:

Yep, it's been a while. I've been hibernating.

By "hibernating," I of course mean spending all my free time doing non-productive thinking by way of internet scuba diving, and staying away from all friends besides a few by all means. And not going out. And claiming all sorts of unconfirmed alcohol allergies.

In any case, a combination of Old People Podcasts and a change of jobs has me feeling a little more social. Oh yeah, Spring's ominous eyes on me, too.

So I went to the Blowout.

This year, I wasn't nearly as organized as last, and considering last year wasn't very well-organized, that means basically I barely even knew when, who and where everyone was playing until band members told me. I had a lot of fun, and talked to a lot of friends I hadn't seen in a while (you know, the hibernation thingy). I saw over the weekend, in order, Bars of Gold, SOYSV, Child Bite (missed Danny Brown because my stupid ass had to be at work erlai in da morn); Cosmic Light Shapes, Ferndale Acid Scene, Old Empire, Pupils (names got shorter as the night went); and Jeecy and the Jungle, RLK and V, The Beggars, Beekeepers, Betty Cooper, Factory Girls, and a little bit of The Dirtbombs. I started on Thursday with Brandon Moss playing the kit with his hands, and ended it with Kyle McBee getting naked--lily-white naked--amongst a blushing crowd. Can't say it was a forgettable weekend.

It was good to, like, go out in public. Thanks, Blowout.
Posted by Jesus Christine at 9:06 PM No comments: