Picking Confetti out of My Belly Button

Saturday night there were a lot of shows going on. A lot of big shows. Jessica Hernandez and the Deltas performed at the Bakery Loft for a CD release, Silverghost released their first LP at The Magic Bag, and Marco Polio and the New Vaccines recorded a live record and DVD at the Belmont. I went to the Marco Polio show. It was a lot of fun, beyond the craziness I always experience at their performances, because I helped my little sis document it on video and interview people before and after the show. The final product(s) will be unimaginably Imaginatronable.
Humpday just so happens to be Hanukah, and it also happens to be Duendsday at Club Bart. Which is where I will be, because I have a band, and we are playing there. Here is the flyer. 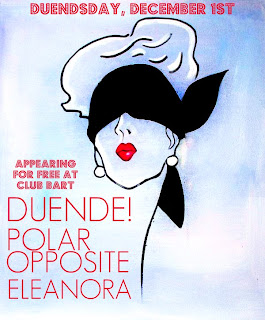 Posted by Jesus Christine at 9:54 PM No comments:

I'm focusing more on music now. That little college-educated snot inside my head sneers and says, "Join the club, you idiot. Have you seen Detroit?" I know, I'm pretty sure at least 70% of people in the Detroit/Hamtramck/Ferndale trifecta "play an instrument" or are "in a band" or "play" an "instrument" or are "in" a "band". I've been on that list for a little while now, but for once I'm making it more of my focus.
Hey, have you heard Eamon McGrath? He's pretty cool. He had nothing to do with Detroit, I just like his music. Here's a video. I thought he was way older, I love his voice. He's written and released 26 albums in 4 years.

EAMON MCGRATH - Dark End of The Street from Mitch Fillion (southernsouls.ca) on Vimeo.

What is with me and my love affair with the Canadians lately?
Also, go to my show on Wednesday, at Club Bart. We have new songs!
Posted by Jesus Christine at 12:33 PM No comments:

Stuck in between collage and create, compose nestles. And I must compose something. This time, written and unwritten sound. It’s important. So really it cannot pertain to the whole of humanity, because that would be guesswork. I can only write about what I know, as the weary saying goes. And I can learn anything, but the point is that what I create has to be intrinsically me, and saturated in things I know about. What do I know about? I know about winter. I know about cold and fire. I know the smell of wet freshly burned wood. I know the feeling of drunk, and the feeling of high. I know the feelings of panic and guilt--I know those feelings very well. I know certain scenes, ones that have been captured in my visual memory since I was a child. I know orgasms. I know disgust. I know moderate content. I know bitterness. I am much, much more bitter than I appear. I know the shadows cast by headlights on a ceiling fan at night in summer. I know the plastic glow in the dark stars that are stuck to that fan with tacky putty that is so old it must be cement by now. I know the angel that is hung on the wall by the bed and the shell necklace that is hung on the same hook, framing it beautifully. I know early winter evenings spent with three women and one man around the loved piano that rests on the opposite wall. I know show tunes. I know crying in my mom’s arms late at night because I can’t stop thinking about all the suffering that happens all over the world and wondering why such awful things happen. I know the kitchen radio. I know about putting blank tapes in the front and washing dishes with a sister and hitting record when I hear a song I like. I know the way Christmas songs sound in June. They sound similar, but with a tinge more masked depression.

Marrow. That’s a good word. I need a piano and a music notebook.

Soundscapes is also a stupid word. But it’s one of those stupid words that’s just become stupid from overuse. It was worn down by thousands of clueless musicians and limited writers. Yet, what other word can I use to describe what I want to create? Most words tend to sound pretentious now, simply due to overuse or sophistication (sophistication being quite different from pretense). But I think I should probably try to find a word, or make one up. Basically, I've been creating art ever since I was little, but never thought to realize my artistic vision in any way other than through conventional and unconventional visual art means; yet I know sound really well; I can understand the poetry of sound and language far more easily than line and form. And I've realized something recently: I don't enjoy making visual art. What I enjoyed about it when I was in school was the community surrounding it, and it's come to me that temporal mediums are the only ones that are productive and bring me happiness. When I'm playing violin or singing, I am free, I can actually communicate with people, which for me is usually so, so hard. Sound needs to be my medium.

So I'm going to try to write an album.

Because I'm starting to think that I should have been in music composition all along.